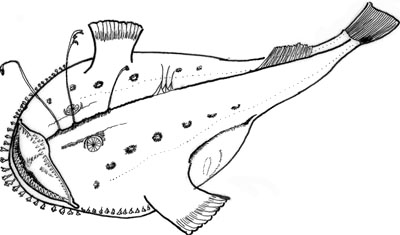 Distribution: Throughout the Mediterranean with the exception of the Black Sea, Atlantic, North and Baltic Sea.

Habitat: Soft and sandy substrates from 10 metres down to 100 metres.

Reproduction: Breeding season locally is between February and August, eggs have oil globules and are distributed in a long gelatinious ribbon.

Behaviour: The name of this benthic species is quite apt, for this is how this lady of the deep obtains her food (the males of the species are parasitic upon the female). With an adaptation of the primary dorsal ray, into what resembles a small fishing rod, fish and bottom dwelling creatures are lured within range of the huge mouth where all are taken in the blink of an eye. If the mood takes her she bites.

Shape: Oversized, broad and flat head with wide mouth. They have very large inward-pointing teeth designed to keep prey in.

Did you know? The anglerfish has a distendable stomach.

Mythology & Fable: According to the Greek poet Oppian (second half of the second century) the anglerfish was known back then as 'day sleeper'.

Medicine: This fish has a great, though hardly known, claim to fame: The first insuline was derived from the pancreas of this fish. It was used to treat diabetes - today it is produced artificially.